When Stefan Braun, a former hotel group CEO who developed two of the Western Cape’s most iconic hotels — the Westin alongside the Cape Town International Convention Centre and Arabella near Kleinmond — turns his hand to student accommodation, one can expect something special.

They had correctly identified a gap for upmarket student “digs” — where the 27m² units sell for between R1.265 million including ground floor parking and R1.360 million for underground parking, or rent for between R 6 800 and R 7 200 per month on the same basis.  One can buy a four-bedroom house with a swimming pool in middle-class Randburg, Johannesburg for that… but this is Stellenbosch!  Where many first-year students arrive with brand new BMWs, Golfs and other status symbols.  Gone are the days when first-years rode bicycles and their cars were banned!

The development has some of the smartest detailing you’ll find anywhere in South Africa.  Look at the single faucet for kitchen and bathroom sinks, for example.

“Studios on Park” showcases an innovative and unique modular approach to the design and construction of a multi-storey residential building. This approach to construction, in which the individual living units are factory manufactured and then stacked onto a concrete slab, is thought to be a first for South Africa. A time saving of about 40% was achieved compared to conventional methods of construction.  A very high level of co-ordination between all members of the project team required prior to construction was one of the main challenges of the project, but ultimately contributed to its successful completion.

The R33 million project comprises 62 modular accommodation units at 27m2 per unit, with a mix of three and four storeys of modular units stacked onto a concrete transfer slab over the parking basement.

The site was handed over on 15 August 2013 and the project was completed in February 2014 (approximately 6.5 months later), with a time saving of at least 40% over conventional construction techniques. The construction period included 12 rain days and the builders’ holidays from 20 December to 6 January, when no activity took place on site.

It is estimated that the comparable conventionally constructed scheme would take about 12 months to complete.

The time saving is attributed mainly to the fact that manufacturing of the modular units, forming the upper floors of the building, was started in a factory at the date of site handover. In other words, construction of upper floors (in the factory) ran concurrently with the excavation and construction of the concrete basement structure on site.

The individual prefabricated, steel framed box units were completely finished in the controlled factory environment (including structure, services and all finishes). Units were delivered to site on a flatbed truck (special transport permits were required) and were placed in position on top of one another to form the final building.

The only elements built in situ were the concrete basement, post-tensioned transfer slab, walkways, staircases and the roof structure.  The concrete walkways between modular units were cast onto Bondek and structural steel. Staircases were constructed from structural steel, as were the roof and gable ends, which “clipped” onto the pod frames.

The quality of the living environment created through this construction method far exceeds that of similar conventionally built residential units. It also meets or exceeds current regulatory requirements with regard to water and energy usage, as well as temperature and acoustic insulation.

PURPOSE OF THE PROJECT

Student housing in Stellenbosch – as in the rest of South Africa – is increasingly in demand. The Studios on Park development was initiated in response to this need. The development consists of a number of buildings of which Studio Vijf is the building discussed here. The building is configured to function as a student residence with 62 units of 27m2 each with communal kitchen and recreational facilities.

The modular nature of the building required made it ideal for off-site modular construction techniques. This approach also gave the developer, Hodevco (a hotel development specialist), an opportunity to try out the new technique on a smaller scale with a view to larger scale for future developments.

There are various generic benefits to using this construction technique, but benefits specifically pertaining to this development were:

Our research indicates that this is the first project of its kind in South Africa. The method is being used fairly commonly internationally, particularly for hotel developments (with a lot of repetition) and inner city sites where space constraints make it attractive.

The challenges that needed to be overcome to complete the project successfully are not rooted in pure structural engineering complexity (the structural concept is relatively simple), but related much more to the more intricate detailing and the  high level of co-ordination required  between different parties involved in the design process. Managing, educating and mentoring the contractor and manufacturer of the modules in the novelties of the technique proved to be a challenge.

The main challenges, in summary, were as follows:

The main loadbearing frame of the building is incorporated into the modular unit manufactured in the factory. This consists of hot-rolled steel columns and beams (fairly light SHS and Channel sections) forming the external frame. Wall, floor and ceiling panels are all supported by cold-rolled lipped channels (purlin sections) welded to the primary loadbearing frame.

Once the units have been bolted together on site, vertical loads are transferred through the steel corner posts from unit to unit and ultimately onto the concrete transfer slab and the foundations below. See typical section through the building below:

Lateral stability was less challenging on this project in comparison to conventional buildings of equal size due to the dramatic reduction in the overall mass of the construction. The lateral loads typically being considered when designing a multi-storey building in the Western Cape are (a) wind loading; (b) notional horizontal forces as prescribed by the design codes; and (c) seismic forces.

The notional horizontal forces and seismic forces are directly linked to the mass of the building and in most conventional buildings the seismic forces far exceed the other two load cases and therefore govern the design of the structure required to resist lateral forces. In this particular instance, the reduced building mass (only 30% of the mass of a comparable conventional building) results in dramatically reduced magnitude of the design notional horizontal load and the seismic load. In fact, it was found that – contrary to expectations – the load case governing the design of the lateral support system was the wind loading rather than seismic action.

Lateral stability in the two directions is dealt with as illustrated in the sketches below. In principle the lateral forces across the length of the building (Direction 1) are resisted by 3.8 x 3.8m welded vierendeel frames connected to one another and sharing the load between the units. The loading across the width of the building (Direction 2) is resisted by the braced long sides of the modular units.

Another structural aspect unique to this type of construction was the requirement to have a measure of acoustic separation between modules. This was achieved by the introduction of high density rubber isolating pads at connection points of all the units. See the connection detail below, illustrating the approach taken. It was found to be very successful with noise transfer between units at least equal to the performance expected for a conventional building. 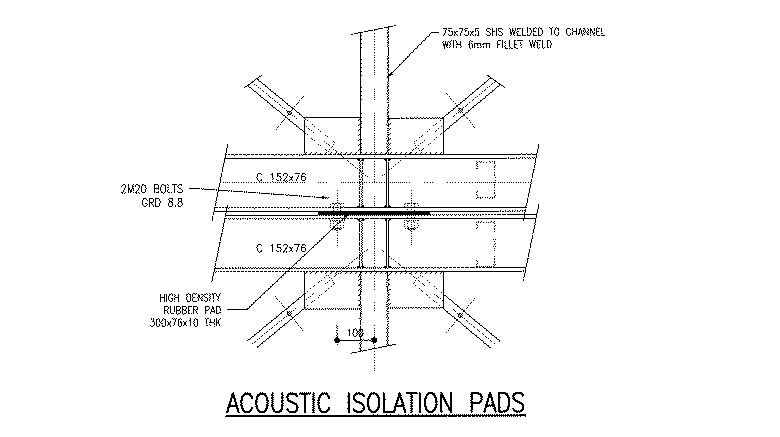 It is worth pointing out that the majority of the structural elements had to be incorporated into and be sympathetic to the overall aesthetic of the building (for example, the vierendeel frames on the external elevations of the building). This required a more careful and detailed approach when dealing with steel connections and also demanded a high level of interaction with the architect.

BENEFITS ASSOCIATED WITH THE INDIVIDUAL UNITS

There were several benefits associated with manufacturing the individual living units in a factory environment off site, such as:

In this particular case, due to the geometry of the units, it was possible to include three additional units within the rights of the property.

These two factors made the project viable. Considering that this development was only 62 units and that a sizable hotel would be at least 250 units, it is evident that economies of scale will sway the feasibility in favour of modular construction. This is based on the assumption that any development being considered for modular construction must involve a high level of repetition to gain the said advantages of economies of scale.

One response to “Studios on Park, Stellenbosch | Jürgen Kieslich Architects”