Adventures with a Yurt (or Ger)

Imagine a small house, granny flat or weekend getaway where the structure only costs you R12,000.  (That’s US$850 or €750!)  You can’t buy a small Wendy house for that… and it’s about the same cost as the emergency materials given to shack dwellers after fires destroy dwellings in informal settlements.

And it’s a structure that one person can pack up and re-erect somewhere else within an hour.  But it can also be as permanent as you want it to be.  In North America, yurts have become popular as permanent homes because of the rising costs of conventional housing.

What if I told you it doesn’t need municipal building plans or approvals?  It’s a tent!  And if you erect it as guest accommodation, AirBnB tells you that it’s been their most popular specialist sub-category worldwide?  That it would make an ideal yoga studio, or info office, and those who have seen it, wished they had one to take to music festivals?

Can you imagine yurt villages along all SA’s major routes, where travellers could stay for under R100 a night?  Now that would be an impetus for tourism!  And I’m sure many accommodation establishments will be taking a careful look at adding yurts to their offering.

Yurts have been around for over 2000 years and known to provide comfortable accommodation from -40°C to +40°C, withstanding winds of up to 160km/h.

My yurt was inspired by photos my sister sent from Mongolia and then, after further research, by the simplified yurt manufactured by Yurta in Canada.  The project is not a commercial venture but aimed to get people thinking out of the box.  I’d be happy to share what I’ve learnt with anyone who wants to take it further.

First, the traditional yurts which have been around for over two millennia right across Asia.

Then a Western take on a yurt by Canadian company Yurta — high-tech and dramatically simplified.  Using 30 laths for the walls appealed to me for its uncluttered look.

So the yurting started!  Yurts are so well documented online that it’s just a matter of learning.  Any aspirant yurt builder must visit the Yurt Calculator.  It gives you everything you need to know, and even calculates the materials needed and gives the total cost.

For the record, my yurt is 6m in diameter with a floor area of 28.3m² and a total height of 2.95m.  It uses 16 rafters instead of normal 60, and the wall uses a similar lesser amount.  The height of the wall is 183cm,  The angle between the wall laths is 69 degrees.  This is the drawing the Yurt calculator produced to show the geometry of my structure: 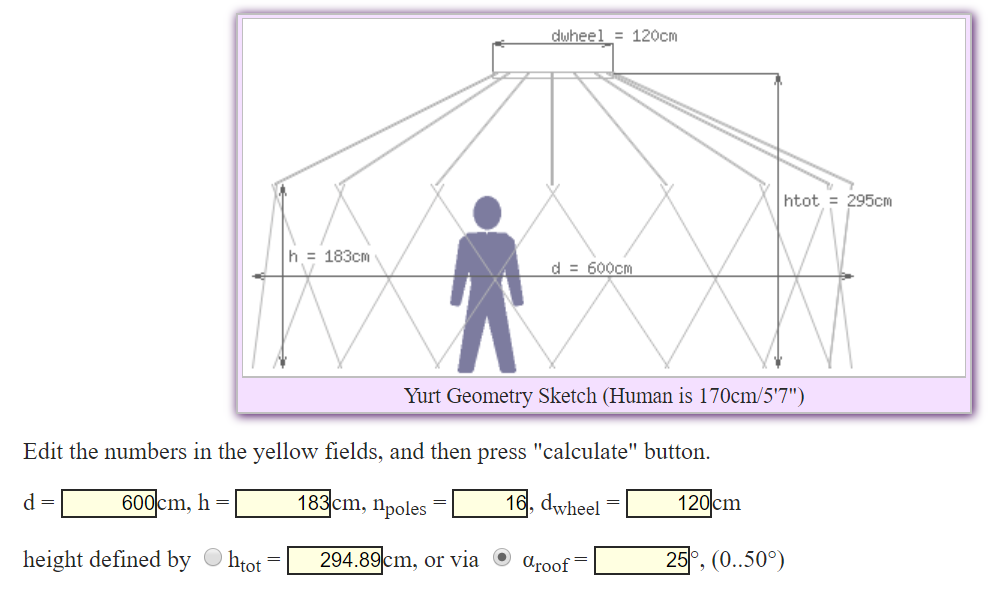 A 6m diameter yurt is about the largest you can fit in the back of a standard bakkie.  Within my 6 metre yurt, I planned living, kitchen, bedroom and bathroom areas.  Would it work?  The proof is in the pudding, as they say — I was going to try yurt living for a few months to test it!  (Bathrooms in smaller yurts are not commonplace.)

What are the basic materials needed for my yurt’s structure?  Bear in mind that this was for a temporary yurt, to determine what sort of space it would offer…

A smaller yurt would be slightly cheaper and, if it’s just for short-term camping, you probably wouldn’t bother with the solid floor.  With a wall height of 1.83 metres, a strip of Ripcote needed to be added to the bottom of a 1.8 metre roll.  If the wall height was under 1.8 metres, this would incur a small saving in the material cost but a significant saving in the time to make up the covers.

Floor
The concept for the floor was 50mm of polystyrene to insulate the floor and raise it out of water’s way, to which hardboard would be glued.  The yurt’s Ripcote wall would then be drawn under the floor and tightened to provide a weatherproof seal.

Providing the ground is level and compacted, 50mm thick polystyrene sheets glued to 3.2mm thick Masonite actually provides a very nice floor!  After shopping around, Isolite provided the polystyrene.  They were fantastic to deal with and very knowledgeable.

They recommended Peekay for the adhesive.  This was a bit of a disaster.  The first adhesive they sold me “ate” the polystyrene — apparently it hadn’t been mixed properly when they decanted it from a big drum.  Thank goodness for doing a test first!

Plywood and thicker hardboards would have been ideal but cost and weight became an issue.  I wanted something I could erect on my own. Click & Lock flooring would also have been ideal, but cost (about R600/m²) was an issue for a temporary project.

To cut the circle, I looked for the right wire to attach to a solar battery but couldn’t find anyone to provide the correct advice.  Isolite offered to give me some wire but in the end I did the cutting with a kitchen knife heated over a blow torch.  That was more than adequate.

Frame
I approached the frame with trepidation — would it really work using 22x44mm SA Pine?  Would 30 pieces of wood really encompass a 6 metre diameter?  With proper planning, basic tools, and not too much skill, it’s possible to make the entire frame in a day.  And the Yurt Calculator proved to be absolutely spot on.

The frame has probably been the biggest success of the whole project.  I never fail to be amazed at how strong it is once the steel cable has been erected.

Make up of covers
The make-up of the covers was sponsored by a leading tent manufacturer.  When it seemed that they would be unable to do it in the short term because of factory strikes and the year-end rush, I looked elsewhere.

An upholsterer with experience of manufacturing tents for Antarctic tourist bases seemed a good choice.  He quoted a first try at R5280 where the covers would be made up on the frame, which needed to be erected at his factory.  “This concept is new to us and we have learnt from past experience that many hidden costs usually pop up,” he said.  That was before he looked at the Yurt Calculator and it’s instructions for making up the covers.  He did say that subsequent covers would be cheaper — about R2500 – R3000 to make up — if the Ripcote was provided.

In the end, the covers were made up by the experienced tent manufacturer.  The entire yurt frame and the rolls of Ripcote were shipped upcountry and I provided the link  to the Yurt Calculator and it’s instructions for making up the covers.  I also sent a CAD drawing of efficient use of Ripcote with a hardboard template for cutting the roof panels. We had tried the template out with a test panel and it seemed fine.  They said it didn’t work but I think they preferred to adapt one of their existing tents.

The door frame is SA Pine and the stable door is Shutterboard which has been treated in the traditional Japanese way — shou sugi ban (焼杉板)  — which makes it water-, bug- and fire-resistant.  It originated in the 18th Century primarily as way to treat cedar siding to make it weatherproof.  The technique — which involves charring a wood surface to render it a deep charcoal-black — has become popular recently as a treatment for contemporary exteriors and indoor furnishings alike.

The wood is charred using a blowtorch.  Excess charcoal is removed using a wire brush.  And then two coats of Linseed Oil are applied.  And the treated wood is said to be good for ten years when another application of Linseed Oil is due!

What makes this yurt unique is the services wall which bisects half the yurt.  A kitchen counter hangs off the one side, with the toilet, hand basin and large shower on the other side.  It’s probably the most efficient plumbing solution possible.

Everything could be collapsed and light weight was a factor.  The kitchen basin is a R20 plastic basin from a hardware store.  The shower, which can be used as a bath, is a pond basin.

And it doesn’t need any underground services.  Blackwater from the Saniflo toilet goes to a biodigestor and greywater is pumped by another Saniflo unit to a recycling system.  Both these will be the subject of future stories.

It finally all comes together
When I contacted Jami & Peter Kastner at Stanford Hills Estate about testing the yurt there, they said they had just the spot — an idyllic grove which they had identified for camping.  And so the real adventure began.

There was a lot of enthusiastic and inquisitive farm help getting the yurt erected.  The first time I realised things were not going to be as expected was when someone said, “This comes together like an old army tent!”  Instead of the walls attaching to the steel cable around the yurt, according to the instructions, the walls attach to the roof with hooks.  Well, I thought, maybe with all their experience, the tentmaker has a better way of doing things…

The yurt hadn’t been up for more than a few days when a very outspoken businessman called. He had to see it NOW! He’d been wanting to buy a yurt from Mongolia for US$1800. I couldn’t dissuade him — it wasn’t anywhere near finished — and he arrived 10 minutes later.  Getting out of his vehicle, he looked at the yurt scornfully… “That’s not a yurt!  That’s a tent masquerading as a yurt,” he said.  “The roof is all wrong!”  A few moments later when he went inside, looking at the walls attached to the roof by hooks, he just shook his head.  Totally unimpressed, he left again as quickly as he had arrived, saying “The frame shows promise but the tentmaker is an idiot!”

And there I had a purist’s perspective!  The roof isn’t the smooth cover you’ll see in the pics at the top of the page, and the peaks and valleys between the rafters does encourage buffeting by wind.  It is reminiscent of an old Provincial Roads maintenance camp rondavel.  And the hooking of the walls to the roof — which doesn’t provide an airtight seal — was to become my biggest bugbear.

I had been warned that darker coloured canvas or Ripcote can be 40% hotter than lighter colours, so Cape Coaters supplied a roll of Ecru Ripcote — an off-white colour similar to the wall of the Yurta yurt at the top of the page.  This was lost at the at the factory where the covers were made up and they asked if they could make it with Sand Ripcote.  Yes, it is much hotter, even in winiter when the sun shines.  But insulating a yurt is quite easy.  The Mongolians use felt from their sheep, and so does Yurta in Canada, combining it with a space-age fabric.  A 100 metre roll of bubble wrap, costing about R240, does the job if one isn’t catering for extreme heat or cold.

Once you move inside, the interior of the yurt is a truly spectacular space.  And it is a space that works very well.

More photos and stories to come… Coming next:

You can subscribe to email notifications for future posts at the top of the right hand column alongside (on laptops & PCs). On low resolution mobile phones, you won’t see it.