One of the early things needed for the house was WiFi — for electricity monitoring equipment and other “smart” elements that might be included.  Asking around, most people in the area use PaarlOnline — not always with great satisfaction.  This seemed to be echoed in some online forums, where BreedeNet was mentioned as an alternative.  Is there a smarter alternative?
[table “” not found /] 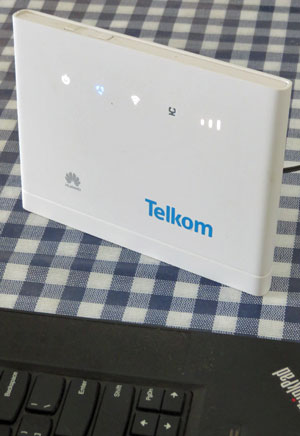 This Telkom router is the Hauwei B315 LTE router which provides WiFi for up to 32 users simultaneously, across a distance of 250 metres.

LTE achieves speeds of up to 150Mbps (far faster than fibre) but the tower near Boschendal is only 3G enabled for Telkom at present.  According to Vodacom’s coverage map, the area is LTE-enabled.  Since the router isn’t network-locked, a Vodacom SIM card will give you LTE — but Vodacom’s bandwidth-only costs (R599 for 10 Gig) are far higher than Telkom’s.

I am quite happy with good 3G speeds because LTE will devour bandwidth.  Some sites, like YouTube, monitor your bandwidth speed and, if you’re downloading at very high speeds, will automatically deliver High Definition content.  Your bandwidth usage will skyrocket.

In the end it was a no-brainer just on price alone.  And after three weeks, I am still delighted with the decision.  The speeds I’m seeing vary between those shown below, and the connection is as stable as one can wish for.  I don’t have line-of-sight to the tower (it’s hidden by a dam wall) nor do I have an external antenna– just the router box on my desk.

What are you getting?  Go to http://www.speedtest.net/ to test yours.

Adding an outdoor Poynting antenna (about R1900 or included as a Telkom option) will improve speeds and stability significantly — up to a ten times improvement.  This video shows the results: Click here

I still want to see what results I get when I use a Vodacom SIM card which should access the LTE network.  I’m also trying to discover Telkom’s rollout plans for LTE.

Working with Telkom
I’ve been really impressed by Telkom’s product offerings for the past two years.  I tried out their SIM card for data two years ago, in a Vodacom dongle.  In Banhoek outside Stellenbosch, it was fast and the cheapest data by far.

A year ago, I bought a Telkom dongle thinking it should work even better.  When I bought it I asked if it was Windows 10 compatible and assured it was.  I wonder if the consultant knew what Windows 10 is… because it didn’t work.  Trying to resolve the issue with the call centre was a nightmare.  The queue at the closest Telkom Shop with technical support — Century City — was a nightmare and there were no Telkom staff to be seen.  The next closest was Cape Town’s CBD where they said they would give me a refund but their system doesn’t allow it.  And then sort of got it working, temporarily.

I gave up on this dongle and continued to use the Telkom SIM in the Vodacom dongle.  Telkom really shot themselves in the foot.  Many people I had recommended Telkom to also gave up and switched to Vodacom dongles and SIM cards.

When I decided to buy the Telkom router, I placed an order on the Telkom website.  There’s no confirmation email but just a message onscreen saying someone will call you back.  No-one called back so after a week I went into the Telkom Shop in Stellenbosch.

And there I dealt with the delightful Pumeza — efficient, friendly, a wry wit and on-the-ball.  And before long, I had my router.

I must say that all Stellenbosch staff have always been helpful.  But when I was collecting my router I mentioned my problem with the dongle.  One of the other staff members told me in all seriousness that Windows 10 has been superseded, and I should upgrade to Windows 8.2!  And he refused to even condiser that his advice was way off beam.  You can’t win, can you?

To Telkom’s credit (?) I did receive a call from a website staff member a month after I had placed my online order, asking if I had been sorted out yet.  Surely the system should show that I had already collected my router?

So I would give Telkom 10/10 for their product offerings and 5/10 for service and support.  It would have been 1/10 had it not been for Pumeza.

A Caveat:  Changing from using a dongle to a router will see an increase in bandwidth usage, especially initially.  In the first 24 hours I used about 7½ Gigs!  A dongle is identified as a metered connection and Windows 10 doesn’t automatically download software updates.  So I had a flood of updates (including the new, full Windows 10 at 3½ Gigs).  Also, Norton operates in economy mode to limit bandwidth use with a dongle, but opens up to full use on the router.  My bandwidth usage has settled down to more or less normal levels now.